If you have built the Academy’s 1/72 F-35A, the breakdown of parts of this kit will be familiar, although most of the parts are new to account for the fuselage and power plant differences between traditional A and vertical take-off and landing B. The F-35A is molded in three colors, white, gray, and black. This kit is all molded in gray. I did the F-35A when it came out so I knew what I was getting into – and it was good.

The instruction booklet is well drawn and concise. Full-color instructions include yellow alert boxes that alert you of step and track options for two build options – everything is buttoned, including vertical take-off or landing, weapon compartments, or flight type; Choosing and choosing between them provides more options. Pilot or stand not included.

The thinly molded ejection seat does not have a seat belt. The decals detail the dashboard screens and side consoles.

The landing and gun pods with sharply molded details are compressed by the hull halves. The upper lift fan is molded into the upper body part, which makes painting difficult. The lower exhaust fan of the forward lift system is molded in a separate cover and is also difficult to paint cleanly. However, there is a drive shaft that runs from the front of the engine to the fan gearbox, as well as full intake housings that look great with the fan and auxiliary intake doors open. Remember that the entrance tunnels are made up of multiple pieces that reveal unsightly seams when viewed from the front.

All rig, gun, and lift fan doors are separate, but the kit provides optional closed-door parts that fit just right and are perfect for masking compartments if you plan to leave them open. Ejector-pin marks spoil the inside of nose gear gates.

Optional exhaust nozzles allow the engine to be positioned for VTOL or conventional flight. My only real complaint about the kit is that the nozzle gets stuck in a boring pod with no details. Fortunately, it’s hard to see.

The body fits without the need for filling. Other optional parts for build options include drooping or stacked leading-edge flaps and fins, and neutral or drooping tailplanes. Everything fits great here too.

The Academy USMC F-35B also offers a “monster mode” option with posts and weapons. Winged ammunition looks good on part trees with plenty of fine detail; I chose not to use it.

It gets really hard to use the model kit with all doors open without adding more weapons. Fortunately, the hinges of all doors are intact.

You can paint the model with the recommended Testors Model Master colors, but the light ghost gray looks too obvious for the RAM band.

The decals provide markings for three USMC F-35Bs, two from USS Wasp, and one from USS Essex. The Decals were awesome and well placed. I appreciated the RAM band on the decals so there is no 18-hour masking I had to do on other F-35s. They line up perfectly, but be careful because there is no way to see how they fit until the decal solution comes into play; I misaligned a pair because I put them upside down – they looked symmetrical to me. The removal instructions are small so they can be difficult to see.

Academy’s F-35B is well managed and designed. All I want is seat belts, weighted tires, a little detail in the rear compartment, more sign options, and a colorful canopy. But the separate inner canopy frame is a nice touch.

The F-35B Lightning II is a STOVL (Short Takeoff / Vertical Land) version of the Lightning II family designed for the United States Marine Corps and allied nations that operated (or previously operated) the Harrier on ships. While the F-35B has the same capabilities as the other two variants, it differs from the F-35A or F-35C with a lift fan behind the cockpit and a movable exhaust nozzle to facilitate STOVL operations. Although the F-35 is heavier than the Harrier, it is equipped with an afterburning turbofan engine that allows the F-35 to fly supersonic. Unlike the Harrier, the F-35 is a network-centric aircraft with the latest low-observable technologies and capable of carrying its weapons in two-weapon compartments. For non-confidential operations, the F-35 can also carry additional external warehouses under the wings (such as the Harrier). 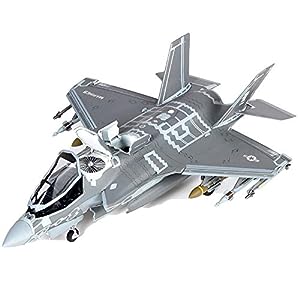 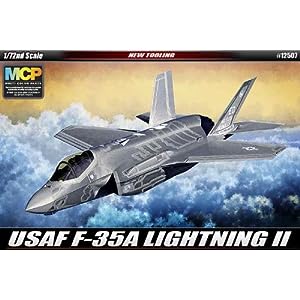 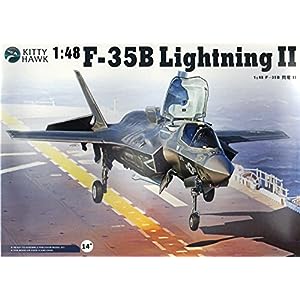