We are with you with a new model kit. AFV Club 1-35 scale M42 Duster. I will try to introduce you to the AFV Club M42 Duster model kit with the notes I made during the construction phase and review.

AFV Club 1-35 scale M42 Duster was a mobile anti-aircraft unit built for the US Army after the Korean War. Based on the M41 light tank chassis, it assembled two of the 40mm Bofors guns tested in combat. In Vietnam, it proved to be an outstanding weapon for basic defense and convoy escort.

AFV Club has released the first completely new kit of this unique vehicle since Tamiya‘s kit in the early 1970s. It has cleanly molded metal pistol drums, metal recoil springs, vinyl one-piece rails, and photoetched metal gun sights, in dark olive plastic. It is quite satisfying in this respect.

By examining the instructions, I could see that the turret and gun required careful planning and assembly. According to the instructions, I started with the body and running gear. Suspension arms and bogie wheels are beautifully molded and combined seamlessly; the one-piece tracks have a beautiful detail – and they’re just the right length!

The upper body contains multiple parts. These are neatly attached to the lower body. The turret well also has more than one part. Proper alignment and mounting of these are very important for the subsequent assembly of the turret cuvette. Tip: Sand the inside of the mounted turret for a smooth surface.

All body caps are separate parts and can be exposed openly. However, there is no interior detail except some detail parts for the large front cover. The lack of interior details disappointed me a bit, I thought it would be more detailed.

The mudguards duplicate the complex storage box and stack of the real vehicle. I built and painted the fenders individually and installed them in the final assembly stages. There is a small muffler attached to the right fender; I install this before adding the air filter channels (L32 / L33 parts). Otherwise, it is difficult to place. Attention should be paid to this.

The detail in the gun assembly and turret interior requires a lot of fragmented and detailed workmanship. I followed the instructions and created the bottom gun tub. At this point, I had not installed the weapon assembly. In the back, I would mount it to test against gun-tub parts that match guns and trunnions.

After the lower turret and cannons are assembled, upper multi-piece armored shields are built. To ensure a precise fit, you need to trim parts a little for front armored boxes.

I like the inclusion of metal barrels for Bofor weapons. Optional flash guards are provided as plastic parts.

The completion of the completed turret not being fully seated showed that it was very tight. I made some sanding in the well and turret tub exterior for a more comfortable fit. For a good measure, I lubricated the inside of the well with liquid soap! I saw the gun tower installed well – but now it won’t fit far enough! After several attempts to identify the problem, I decided to remove the D8 Part with a turret connecting ring from the inside of the hull. That’s it! In this way, he allowed the tower to sit properly. With such a tight fit, a locking insertion mechanism such as Section D8 seems unnecessary. Whether you use it or not is up to you.

I painted my Duster with various olive green paints from Tamiya. There are stickers for five different vehicles; they are a bit brittle, but they were applied fine and smoothly on a glossy primer with some sticker solution.

I finished my M42 in 30 hours. It was a big challenge, but the result was really nice: a persuasive model. Considering some assembly challenges, it requires moderate or higher modeling experience.

For those who make modern armor models, especially those who prefer the Vietnamese era, they will want to add this armored kit to their collections. 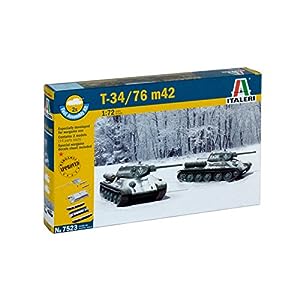 Unbekannt
$68.00
Unbekannt M42A1 SELF PROPELLED Anti-AIRC Make sure this fits by entering your model number. This is a model kit and needs assembling. Scale: 1: 35
Add to wishlist
Add to cart
Quick view Visit the Arma Hobby Store
$21.99
Make sure this fitsby entering your model number. This model kit might require assembly and painting. Cement, tools and paint are not included. Contains small parts, recommended for ages 14 & up. Skill level 3. THIS IS NOT A TOY. Decals included for extra detail and realism.
Add to wishlist
Add to cart
Quick view

Visit the Arma Hobby Store
$43.99
Make sure this fitsby entering your model number. This model kit might require assembly and painting. Cement, tools and paint are not included. Contains small parts, recommended for ages 14 & up. Skill level 3. THIS IS NOT A TOY. High quality decals included for extra detail and realism.
Add to wishlist
Add to cart
Quick view

Visit the Arma Hobby Store
$68.99
Make sure this fitsby entering your model number. Arma Hobby releases 1/48 scale kits! The first is an obvious choice for a Polish company, the legendary PZL P.11c. Fighter airplane that was "First to Fight" in September 1939 The box includes newly tooled and moulded plastic parts, high quality Techmod decals with markings for 4 variants, photoetched details, plus windshield and wheel masks.
Add to wishlist
Add to cart
Quick view